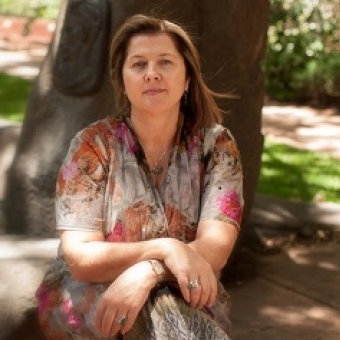 Linda Bartolomei is a Senior Lecturer and  the a co-convener of Forced Migration Research Network (formerly the Centre for Refugee Research)  in the School of Social Sciences, Faculty of Arts and Social Sciences, UNSW. She lectures in Social and  Community Development and Refugee Studies in both the  Master of  Development Studies and the Bachelor of Social Work.

Since 2001, Linda has been involved in a series of action-based research projects exploring the challenges associated with identifying and responding to refugee women and girls at risk in Kenya, Ethiopia, Thailand, India, Sri Lanka and Australia. The results have had significant impact on research and policy and were instrumental in the introduction of the UNHCR’s Conclusion on the Protection of Women and Girls at Risk in 2006 and the implementation of the Heightened Risk Identification Tool.

Linda has contributed to several missions on behalf of UNHCR Geneva to support the implementation of the Conclusion and further development of the Tool and regularly presents research reports at UNHCR Geneva. One of the most significant international refugee and community development projects Linda undertook was the  “Survivors, Protectors, Providers” Project as part of the 60th Anniversary of the UNHCR Refugee Convention. With Professor Eileen Pittaway, she was selected for the project by The United Nations High Commissioner for Refugees. The project included a series of Dialogues with refugee and IDP women and girls, men and boys, from refugee groups from India, Colombia, Jordan, Uganda, Zambia, Thailand, Finland and Australia. Linda previously led  a practice based research project in New Delhi India which is modelling refugee led community development and social support. The project, funded by the DIBP Displaced Persons Program, is being implemented in direct partnership with refugee communities from Afghanistan and Somalia with the support of UNHCR and BOSCO Delhi. The Refugee Community Development Project (RCDP) was an innovative refugee community led project based in New Delhi, India. It was developed by the the Centre for Refugee Research) in partnership with the Afghan and Somali Refugee communities and UNHCR in New Delhi. The project incorporated education, livelihoods, and women’s safety and social support initiatives. It has received multi-year funding ( 2012 – 2106) from the Department of immigration’s Displaced Persons Program (DPP) and was jointly managed by CRR and BOSCO Delhi. Over the last year she has worked with UNHCR Geneva and a team of women from refugee backgrounds to advocate for and monitor the inclusion of refugee women and girls’ protection needs and rights in the new Global Compact on Refugees (GCR). She is currently leading a multi-year project in five countries in the Asia- Pacific with colleague Adjunct Professor Eileen Pittaway to support the implementation and monitoring of the commitments to refugee women and girls in the GCR. The project is funded by Australia's Department of Foreign Affairs and Trade (DFAT).

Refugee women and girls in the Global Compact on Refugees

Due to continuing global concerns and political tensions over the increasing mass movement of refugees and migrants, in September 2016, the United Nations General Assembly (UNGA) issued the New York Declaration Addressing Large Movements of Refugees and Migrants. The Declaration Addressing Large Movements of Refugees and Migrants was passed by consensus from all Member States. As well as reaffirming commitments to the 1951 Refugee Convention, and the 1967 Protocol, States committed to provide increased and coordinated protection for refugees and migrants (54). Mr Volker Türk, Assistant High Commissioner for Protection, UNHCR, described this international, high-level commitment as a “minor miracle”, indicating its nature as the most significant commitment to the protection of refugees in decades. He has invited academics, advocates, service providers, and refugees to provide input into a Program of Action (POA) to realise the commitments of the GCR.

In May 2017, the research team developed a comprehensive gender analysis of the draft GCR and POA to support advocacy for stronger commitments to the protection of refugee women and girls in these documents (58). This analysis has already generated significant international interest from UNHCR, the Australian Government, the UN Special Rapporteur on Violence Against Women, and peak bodies including International Council on Voluntary Agencies (ICVA) who have circulated the document to all their members. Volker Turk (Assistant High Commissioner for Protection, UNHCR) publically acknowledged the value of the CIs’ extensive work in that respect at the opening plenary of UNHCR NGO Consultations in June 2017 in Geneva.

The Refugee Community Development Project (RCDP) was an innovative refugee community led project based in New Delhi, India. It was developed by the the Centre for Refugee Research) in partnership with the Afghan and Somali Refugee communities and UNHCR in New Delhi. The project incorporates education, livelihoods, and women’s safety and social support initiatives. It has received multi-year funding ( 2012 – 2106) from the Department of immigration’s Displaced Persons Program (DPP) and was jointly managed by CRR and BOSCO Delhi. People Involved: Dr Linda Bartolomei, Dr Kristy Ward, Effie Mitchell, Associate Professor Eileen Pittaway and Kerrie James

People who have had to flee their homes and live for years with violence and denial of their rights, welcome the human rights which life in Australia promises. However resettlement in a new country is not an easy process and newly arrived refugees face many challenges as they adjust to life in a new country. One of these challenges is learning about and adapting to a different system of laws and rights. Resettlement brings an assumption that the rights of refugees previously denied them will be restored, and that they will enjoy and experience rights in similar ways to other citizens. However, preliminary research by FMRN and its partners has found that the issue of human rights in refugee settlement is far more complex. Many report that concerns over the meaning of rights, or how information about rights is presented has lead to confusion and misunderstandings.

Building on strength to combat violence: Community based approaches to working with refugee families who are experiencing family, domestic violence and child protection problems
Eileen Pittaway and Linda Bartolomei, Australian National Committee on Refugee Women/Research Grant This project involves working with refugee communities across Australia to determine how they perceive the problems which they are experiencing and solutions which they suggest.  Models of service response are then developed and trailed with the communities.  AMES Victoria and Relationships Australia NSW are also partners in this project.

Beyond resettlement to sustainable solutions. Improving the protection of refugee women and girls at risk and other vulnerable groups– Trialling community involvement in the expanded use of the UNHCR Heightened Risk Assessment Tool – UNHCR Geneva/Jordan
Eileen Pittaway and Linda Bartolomei, Department of Immigration and Citizenship/Displaced Persons Program research grant. This project will develop and trial an innovative community based response to the protection of women and girls at risk. What is unique about the model is that it will draw on the knowledge, skills and capacity of the refugee population to enable them to them to plan and provide services for their own community. It will also evaluate the usefulness of the Heightened Risk Identification Tool in responding to the needs of vulnerable refugees.  It will be developed and implemented in partnership with The Community Development, Gender Equality and Children’s Services Section (CDGECS) and UNHCR Amman.  The project is based on the principles of human rights, community development and has a focus on livelihoods and sustainable outcomes. Jordan is the UNHCR preferred site for this trial. The model developed will include guidance notes and training materials so that it can be replicated in other refugee sites.

Survivors, Protectors Providers, Dialogues with Refugee and IDP Women and girls in 7 countries
As part of the UNHCR Commemorations of the 60th anniversary of the refugee convention, CRR has been commissioned by UNHCR Geneva to conduct consultations with Refugee and  IDP women and girls in India, Jordan, Colombia, Zambia, Uganda, Thailand and Finland, to determine their protection needs.  These will inform the pledges which the High Commissioner has asked governments to make at the High Level Ministerial meeting in December.  Eileen Pittaway and Linda Bartolomei will be working with refugee women to make presentations at UN meetings in June and December 2011 on this project. The results will inform a Book, “The Global Situation of Refugee Women and Girls”.

An International Conference to commemorate the 60th Anniversary of the Refugee Convention
In June 2011 Linda will co-host a large international conference, with Eileen Pittaway co-sponsored by UNHCR and the Refugee Council of Australia, DIAC and a number of other community based organisation.  This follows a very successful 50th anniversary conference also held at UNSW in 2001.  The outcomes of the conference will be taken directly to as series of UNHCR meeting in Geneva.  Interns from the Master of Social development and the Bachelor of Social Work will assist with the conference and attend the meetings in Geneva.

Teaching areas
Linda teaches into the Bachelor of Social Work and Master of Development Studies programs.