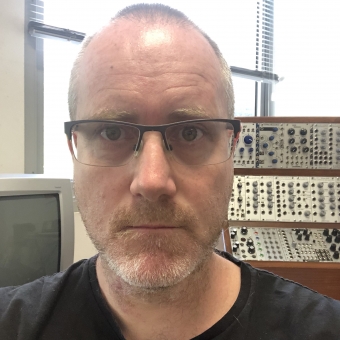 Adam researches into media and music, and is active as an experimental composer, performer and sound designer.

He founded and performs with the Sydney City Humanoid Electronic Modular Ensemble. He directs the Sound Lab Ensemble at UNSW. He has a range of public works and commissions, including a three year residency with radio 2SER to remix free-to-air television live, a month-long installation in Martin Place using archival audio and motion sensors, video art for Deborah Kelly and live performance in the Sydney Opera House of a  commissioned radio dramatisation of an unpublished work by author John Birmingham.

His studio works include publication as part of the online Cities and Memories project which worked with field recordings of protests from Nauru Regional Processing Centre and an early field recording from Mississippi State Penitentiary (No More my Lawd), sound design for feminist artist Deborah Kelly’s video work Lying Women, an experimental audio documentary on author Philip K. Dick and classical music (The Owl in Daylight) that was commissioned by Radio National, and a modular synthesis album Phonoccultural Studies that explores the concepts forwarded by the global Occulture research group. He was recently commissioned by ABC music to produce long form audio for the ABC Kids Sleep Through program.

A founder of the Machine Music Research Collective, he has a range of publications around hyperstition and phonnoculture, soundscapes in literature and communication theory.