How a 'gonzo' press gang forged the Ned Kelly legend

Four reporters joined the showdown with the Kelly gang 140 years ago. They became part of the story and set the tone for a legend.
Kerrie Davies and Willa McDonald | UNSW Newsroom 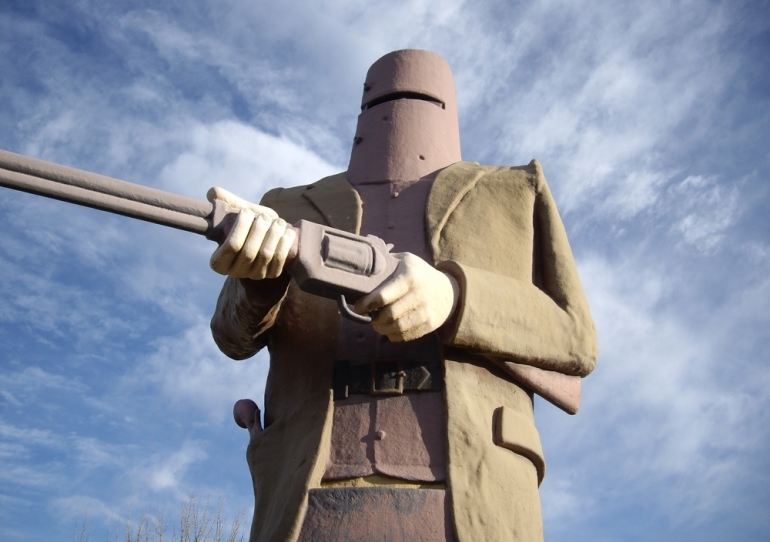 Since four Victorian journalists witnessed Ned Kelly’s last stand on June 28 1880, their vivid accounts have influenced portrayals of the bushranger – from the world’s first feature film in 1906 to Peter Carey’s 2000 novel, True History of the Kelly Gang, adapted to a gender-bending punk film earlier this year.

In the hours before the Glenrowan siege, the four newspaper men – Joseph Dalgarno Melvin of The Argus, George Vesey Allen of the Melbourne Daily Telegraph, John McWhirter of The Age and illustrator Francis Thomas Dean Carrington of The Australasian Sketcher with Pen and Pencil – received a last-minute telegram to join the Special Police Train from Melbourne to confront the Kelly Gang.

The rail journey would prove to be one hell of an assignment and inspiration for Kelly retellings over the next 140 years.

The journalists have a fleeting scene in the 1970 Ned Kelly film starring a pouty Mick Jagger. Two characters rush up to the train, holding huge pads of paper to signal their press credentials to the audience.

It’s a cinematic glimpse of the journalists whose historic descriptions continue to influence the Ned Kelly cultural industry that is the cornerstone of Australia’s bushranger genre. 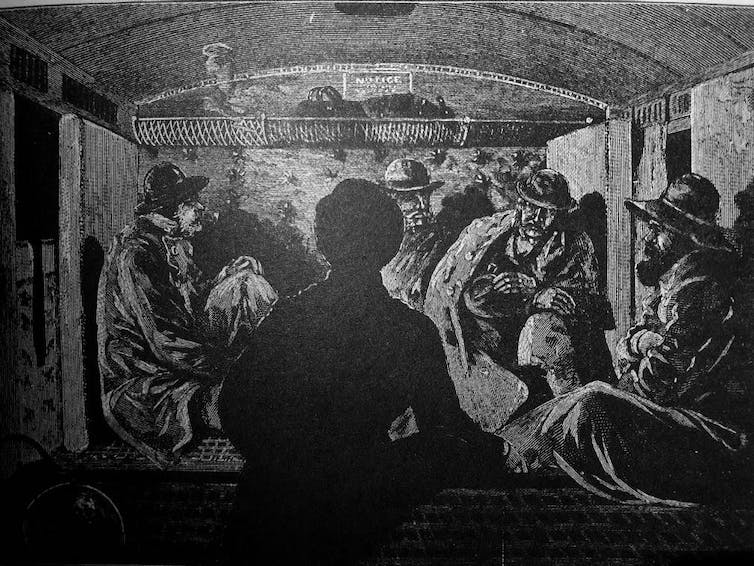 Four reporters (plus a volunteer) huddle in the train’s press carriage in an image drawn by Carrington. T. Carrington/SLV

The train left Melbourne late Sunday evening. Carrington, “embedded” along with the others, described the journey:

… the great speed we were going at caused the carriage to oscillate very violently … The night was intensely cold.

McWhirter’s take was somewhat more upbeat, suggesting a thrill in the cold evening air. He wrote the night was

a splendid one, the moon shining with unusual brightness whilst the sharp, frosty air caused the slightest noise in the forest beyond to be distinctly heard.

After 1am Monday, the train arrived at Benalla, where it picked up more troopers, horses and “Kelly hunter” Superintendent Francis Hare, played by Geoffrey Rush in Gregor Jordan’s 2003 adaptation of Robert Drewe’s novel, Our Sunshine.

Sometime later, the train was flagged down before Glenrowan by schoolteacher Thomas Curnow, alerting the travelling party to the dangerous Kelly gang ahead. In a follow-up article about the siege, Melvin reported the first details of the teacher’s bravery. This would become a pivotal scene in future Kelly recreations: “Kindling a light behind a red handkerchief, he improvised a danger signal”.

When the train arrived at Glenrowan station, the horses were released and bolted “pell-nell into a paddock”, wrote Carrington, as the Kellys opened fire.

A 1906 Australian-made production is thought to be the world’s first feature-length narrative movie.

Part of the story

Unhindered by modern media ethics, the journalists became actively involved in the siege. Their involvement is a nod to “gonzo journalism” practices – made famous nearly a century later by writer Hunter S. Thompson – in which journalists join the action rather than neutrally report on it.

Kelly had a love-hate relationship with the press. He once wrote:

Had I robbed, plundered, ravished and murdered everything I met, my character could not be painted blacker than it is at present, but I thank God my conscience is as clear as the snow in Peru …

Early in the siege, the journalists sheltered from the gunfire at the station, until they saw Hare bleeding from the wrist. Carrington wrote:

We plugged each end of the wound with some cotton waste and bound it up with a silk pocket handkerchief … Mr Hare again essayed to start for the hotel. He had got about fifty yards when he turned back and reeled. We ran to him and supported him to a railway carriage, and there he fainted from loss of blood … Some of the bullets from the verandah came whistling and pinging about us.

As the siege continued into the early hours, the journalists recorded the wails of the Glenrowan Inn’s matron, Ann Jones, when her son was shot, as well as the eerie tapping of Kelly’s gun on his helmet, which Carrington wrote sounded like “the noise like the ring of a hammer on an anvil”.

Their interviews with released hostages revealed gang member Joe Byrne was shot as he reached for a bottle of whiskey that, like Curnow flagging down the train, has become another key Kelly siege scene. 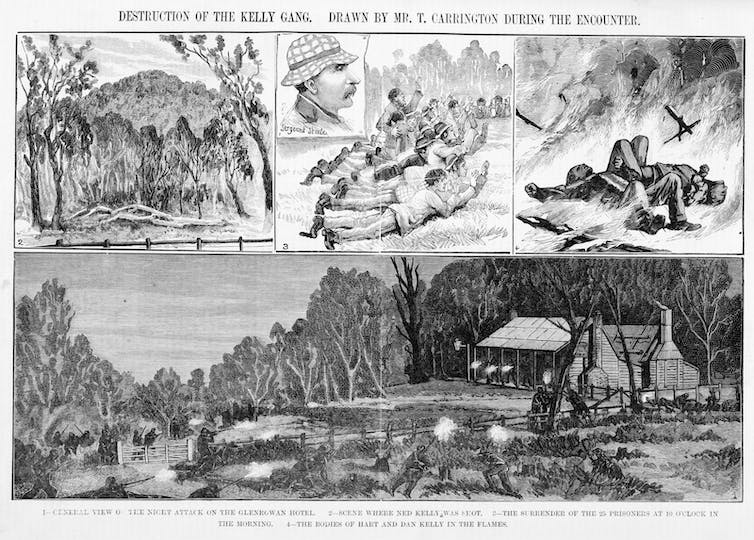 In one frame, drawn during the siege by Carrington, 25 prisoners are released. State Library of Victoria

Man in the iron mask

Of all the gripping details the journalists recorded, their first descriptions of the bushranger emerging in his armour in the morning mist were what proved most inspiring to subsequent Kelly creators.

Allen wrote the helmet was “made of ploughshares stolen from the farmers around Greta”, describing the cutting blade construction, and called him “the man in the iron mask”. Carrington wrote:

Presently we noticed a very tall figure in white stalking slowly along in the direction of the hotel. There was no head visible, and in the dim light of morning, with the steam rising from the ground, it looked, for all the world, like the ghost of Hamlet’s father with no head, only a very long, thick neck.

After Kelly was shot in the legs, the writer described his collapse and his dramatic unmasking:

The figure staggered and reeled like a drunken man, and in a few moments afterwards fell near the dead timber. The spell was then broken, and we all rushed forward to see who and what our ghostly antagonist was […] the iron mask was torn off, and there, in the broad light of day, were the features of the veritable bloodthirsty Ned Kelly himself.

Precious film footage restored by the Australian National Film and Sound Archive of the 1906 film The Story of the Kelly Gang, the world’s first feature film, shows Kelly shooting at police in his iconic armour, then collapsing by a dead trunk on the ground surrounded by police. The scene is just as Carrington and his colleagues described it in their reports.

Perhaps the most faithful rendering of Carrington’s Kelly description is Peter Carey’s fictional witness in the preface of True History of the Kelly Gang.

Carey’s witness echoes the description of Kelly as a “creature” and describes its “headless neck”.

After he was shot in the legs, the witness recounts Kelly “reeled and staggered like a drunken man” and falling near dead timber. The book’s preface and Melvin’s first Argus report both describe Kelly after he fell as “a wild beast brought to bay”.

Carey’s witness may be fictional, but his account is based on journalists’ accounts of witnessing Kelly’s capture. Carey credited many of his research sources to Kelly historian Ian Jones, who republished Carrington’s account titled Catching the Kellys – A Personal Narrative of One who Went in the Special Train along with illustrations in Ned Kelly: The Last Stand, Written and Illustrated by an Eyewitness.

The journalists helped the police strip Kelly of his armour and carry him back to the station, cut off his boots and kept him warm, all the while interviewing him as the siege continued with the remaining bushrangers inside the inn.

McWhirter remarked the bushranger was “composed”.

“I had several conversations with him, and he told me he was sick of his life, as he was hunted like a dog, and could get no rest,” Carrington wrote. He described Kelly’s clothes underneath the armour – a crimean (meaning a coloured, no button flannel) shirt with large black spots.

The journalists then turned their attention to the burning of the inn, featured in the background of Sidney Nolan’s 1946 painting, Glenrowan which depicts a fallen Kelly towering in his armour over policemen and Aboriginal trackers.

Kelly was hanged in Melbourne in November 1880, a few months after the journalists’ train ride and the siege.

The journalists continued their careers, with Melvin becoming the most prominent of the four in participatory journalism. After a stint as a war correspondent, he joined the Helena ship as an crew member to investigate, undercover, the “blackbirding” trade that indentured South Pacific Islanders to the Australian cane fields. 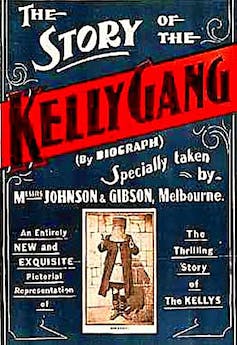 In the 1906 review of the first feature film - The Story of the Kelly Gang and exhibition, The Age critic wrote, “if there were any imperfections in detail probably few in the hall had memories long enough to detect them”.

Yet, the 1906 film was criticised by the Argus for not being faithful to the original descriptions of his “bushman dandy” dress as described by Carrington and his colleagues on the day.

The art may be in the interpreting eye, but the scenes are from that first rough draft of history.