Trans* - A Short History of the Trans* Body in Visual Culture 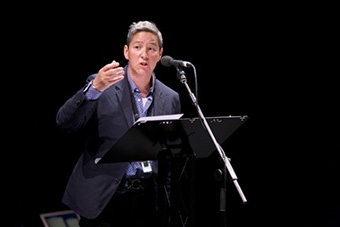 The category of trans* takes the prefix for transitivity and couples it with the asterix that indicates a wildcard in internet searches; it is a diacritical mark that poses a question to its prefix and stands in for what exceeds the politics of naming. To investigate trans* representation is also to propose that something within trans* representations exceeds the framing of transgenderism. By looking at trans* materials, we can see what is gained and what remains unpredictable about the popular embrace of transgender bodies, or some of them, and transgender representations.

The talk is in three parts and is drawn from Jack's new book Trans*: A Quick and Quirky Guide to Gender Variance.

"In the first part of the talk, I address where we have been in terms of the history of cinematic representations of gender variant bodies; in the second I address histories of representation drawn from photography archives; and finally, I turn to contemporary popular film and TV to see how we might think differently about gender, trans* politics and popular and unpopular culture."

Jack will be later joined onstage by Teddy Cook and Liz Duck-Chong for a discussion on the ways that this history and representation of trans bodies intersects with contemporary approaches to securing health equity and inclusion for trans and gender diverse people. The panel will be facilitated by Associate Professor Christy Newman.

JACK HALBERSTAM is Professor of Gender Studies and English at Columbia University. Halberstam is the author of six books including: Skin Shows: Gothic Horror and the Technology of Monsters (Duke UP, 1995), Female Masculinity (Duke UP, 1998), In A Queer Time and Place (NYU Press, 2005), The Queer Art of Failure (Duke UP, 2011) and Gaga Feminism: Sex, Gender, and the End of Normal (Beacon Press, 2012) and, most recently, a short book titled Trans*: A Quick and Quirky Account of Gender Variance (University of California Press). Places Journal awarded Halberstam its Arcus/Places Prize in 2018 for innovative public scholarship on the relationship between gender, sexuality and the built environment. Halberstam is currently working on several projects including a book titled WILD THING: QUEER THEORY AFTER NATURE on queer anarchy, performance and protest culture the intersections between animality, the human and the environment.

TEDDY COOK is a health promotion specialist, regional community champion, LGBTIQ+ advocate, speaker and educator, with expertise on trans & gender diverse (TGD) health needs. Teddy has worked at ACON since April 2012, and is now Manager, Trans & Gender Diverse Health Equity. His work is particularly focused on implementing the recommendations of ACON's recently launched Blueprint to Improve the Health and Wellbeing of the TGD Community in NSW, as they relate to ACON’s own programs and services, as well as across government, health, legal and community settings.

LIZ DUCK-CHONG is a writer, sexual health nerd and filmmaker who has had articles, poetry and essays in a range of publications, including in The Guardian, Crikey, SBS and Archer Magazine. She sits on the board of Twenty10 and in her spare time co-hosts wholesome queer sex ed podcast Let's Do It. You can find her on Twitter at @lizduckchong.

CHRISTY NEWMAN is Associate Professor at the UNSW Centre for Social Research in Health. She has worked at the Centre for the last 15 years, investigating social issues relating to health, sexuality and relationships, particularly in the fields of sexual and reproductive health, blood borne virus prevention and care, sexual and gender diversity, and child and family wellbeing.

Auslan
Auslan interpreting services will be provided at the event.