This talk is animated by both a deceptively simple assumption and a deceptively simple answer to a fundamental question.
The assumption is that if it is true, as Lynn Hunt (2007) has argued, that human rights in their current forms were invented at critical moments in history, from the French Revolution to the adoption of the Universal Declaration of Human Rights in 1948, then human rights can be reinvented.

If this is so, then the fundamental question becomes: In light of everything we know about the current status of human rights in relation to the most pressing of contemporary problems, should they be reinvented?

The talk begins by answering “yes” to this fundamental question and then proceeds by sketching out the rough outlines of a reconceived approach to human rights. The basic argument of the presentation is that human rights can and should form the basis for both justice-seeking and specific social and institutional action in the future.

In this respect, I part ways from critics—from both the progressive left and neoconservative and nationalist right—who would like to see human rights consigned to the dustbin of history. Yet it also seems quite clear that human rights can and should play these vanguard roles only if they are radically reimagined.

In other words, against the background of a number of conceptual, political, and ideological challenges, only a revolutionary—rather than a reformist—collective response will prove capable of freeing human rights from the catastrophic constraints of the current moment. 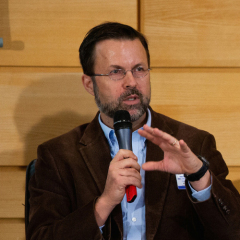 The founding series editor of Stanford Studies in Human Rights, he is the author, editor, or coeditor of numerous books in the field, including Letters to the Contrary: A Curated History of the UNESCO Human Rights Survey (Stanford UP, 2018), Anthropology and Law (NYU Press, 2017), Human Rights at the Crossroads (Oxford UP, 2013), Surrendering to Utopia: An Anthropology of Human Rights (Stanford UP, 2009), and The Practice of Human Rights: Tracking Law Between the Global and the Local (Cambridge UP, 2007). He has published dozens of journal articles and book chapters on law and society and human rights and his work has also appeared in more general outlets such as The Paris Review and Boston Review.