Dr Sandy Evans has been recognised for her outstanding artistic achievement and contribution to Australian jazz.
Diane Nazaroff | UNSW Newsroom 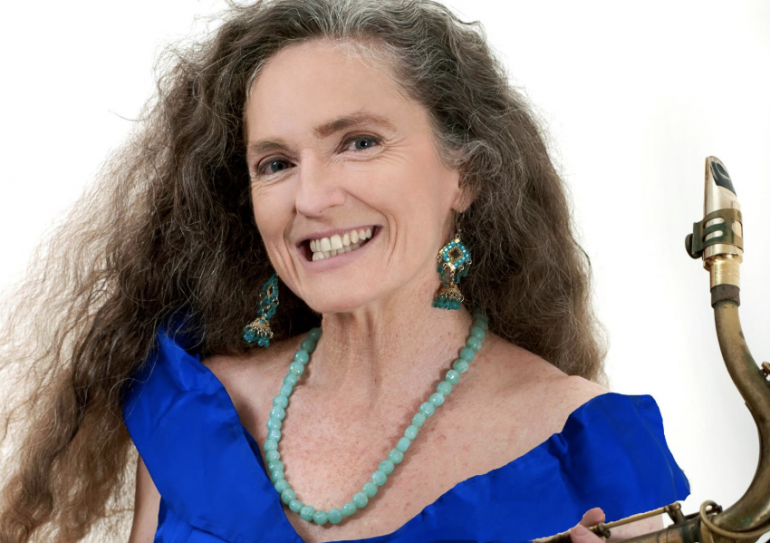 “I am honoured and humbled to be inducted into the Bell Awards Hall of Fame,” the saxophonist and composer said. “Graeme was an exceptional musician and community leader whose dedication, generosity, support, creativity and open-mindedness remain a very important professional and personal example to me. To be associated with his name in this capacity is an extraordinary privilege.”

The Hall of Fame award recognises outstanding artistic achievement and contribution to Australian jazz by a living artist. Dr Evans has played with and written for some of the most important groups in Australian jazz since the early 1980s. She has toured extensively in Australia, Europe, Canada and Asia, and been featured on over 40 albums. Dr Evans leads the Sandy Evans Trio and Sextet, and co-leads Clarion Fracture Zone and GEST8.

“Clarion Fracture Zone featuring my UNSW colleague Alister Spence was one of very few Australian jazz groups to receive a 5-star review in the US jazz magazine Downbeat. I regularly perform with my jazz trio with Brett Hirst and Toby Hall and this is always a real treat for me.”

Dr Evans has an extensive composition portfolio and has received many commissions from leading jazz, improvising and new music ensembles. She also has a keen interest in Indian classical music and collaborates regularly with Sydney-based Indian musicians Sarangan Sriranganathan and Bobby Singh.

She recently collaborated with South Indian percussion virtuoso Guru Kaaraikkudi Mani in New Springs for Multicultural Arts Victoria; and with Sriranganthan and Singh in Ahimsa: Mediatations on Gandhi, a project at the Seymour Centre which reflected on Gandhi’s writings on non-violence.

Dr Evans is also an educator and music researcher who has inaugurated a Jazz Improvisation Course for Young Women run annually by Sydney Improvised Music Association.

“I began teaching at UNSW as a casual in 2013 when I was delighted to be asked to start a Jazz Orchestra,” she said. “I am constantly inspired by my students whose passion, dedication and creativity appear to be endless. It’s a very supportive and creative environment among the music students at UNSW and I’m very happy to be part of it.”

She has won many awards and honours, including an Australia Council Fellowship (2017–2018), Churchill Fellowship (2014) and an Order of Australia Medal (2010). Her awards for music include an AIR Award for Best Independent Jazz CD (2011), Bell Award for Australian Jazz Musician of The Year (2003), 3 ARIA Awards, 2 Mo Awards and an APRA award.

Dr Evans said every musician she has worked with and continues to work with in the Australian jazz community deserved the Hall of Fame Award, “along with so many others who make our scene so vibrant and unique.“I can only accept this Award on behalf of all my colleagues and friends and feel it is a tribute to them,” she said. “I extend my deepest thanks to them for sharing the joy of music-making with me and constantly inspiring and teaching me about the infinite possibilities of our art form.”

The Sandy Evans Trio will be performing at Venue 505 on October 17, in a double bill with UNSW student ensemble Anoesis.