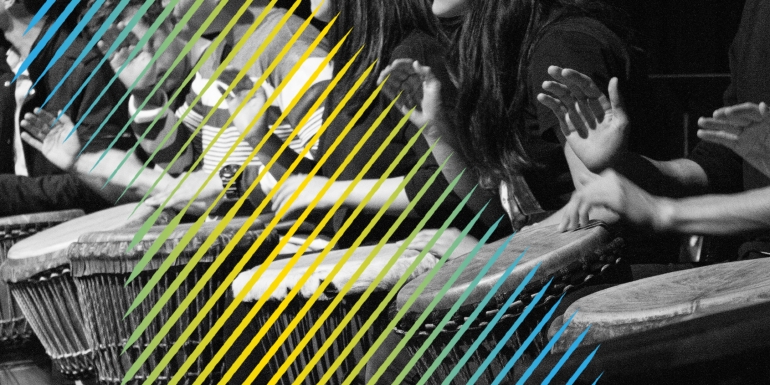 Feel the complex rhythms move you as vocalists and drummers share powerful music originating from neighbouring continents and worlds apart. Shaped by voice and hand, their sounds interplay, overlay, and blend for ever-more resonant textures.

Free improvisation, original arrangements and traditional works sit side-by-side in this program from the Balkan Ensemble and West African Drum Ensemble, who also come together for a special collaboration.

One of the key features of Balkan music is the use of additive rhythms and you will hear common dance rhythms including 7/8, 9/8 and 11/8 during the concert. Other features include the use of drone textures and free improvisations preceding metred works.  Improvisation is also a feature during the course of a song or dance piece.  The repertoire will include examples of modern Bulgarian choral arrangements of traditional songs, which utilise the striking vocal quality for which Bulgarian folk singers are famous.

The Balkan Ensemble has woven these elements into their own arrangements of the songs for this performance.

The Balkan Ensemble will be joined by West African Drummers for their final piece, an Albanian wedding song, traditionally performed by the young girls of the village who sing and play frame drums (while dancing).

The djembe is one of the most important hand drums of Africa (meaning that it is played with bare hands, as opposed to drum sticks). Performers on the djembe learn to use differing hand shapes and positions on the drum’s playing head, to elicit a variety of timbral qualities from the instrument. The musical structures are therefore created not by melody as it is conventionally understood, but by the patterns of relationships between these various timbres. Typically, most West African drum ensemble music also features a range of differing parts, and it is in the interplay between these parts that the music, and the musical complexity, is generated. The ensembles also commonly feature accompanying parts on one or more metal bells, and these parts are generically referred to in English scholarship as “time lines”. These parts have the capacity to cut through the collective sound very clearly, and so serve as important metric reference points for all ensemble participants and listeners.