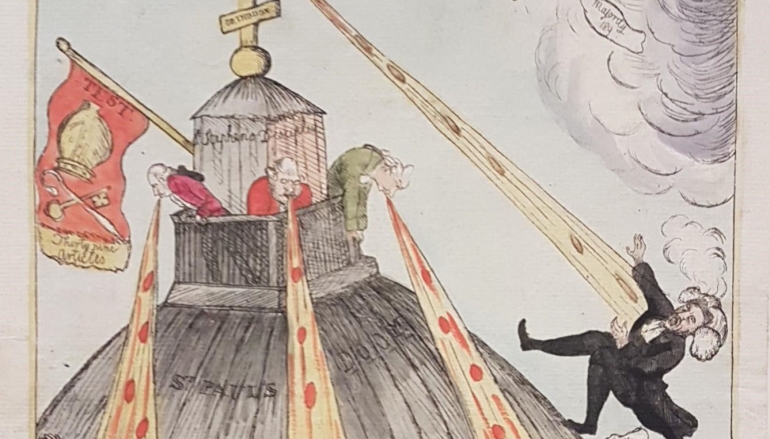 Religious dissent in the eighteenth century can seem an arcane matter of disagreement over ritual; or it can appear a romantic position of dissidence. Neither is right but both point up the way that in debates over the rights of dissenters a notion of illegitimacy recurs, a suspicion of mixing roles.  So the minister and experimental scientist Joseph Priestley, was called Dissenting Dr, Dr Phlogiston, Political Priest, Reverend Philosopher: in each case it’s as though this is an oxymoron. Such promiscuous mixing may signal civic danger, even precede conflagration. (So Priestley was also famously, called Gunpowder Joe.) This paper looks at some high and low versions and at some printed and graphic versions of that argument.

Professor Stephen Bygrave teaches at the University of Southampton, where he is a Professor of English. His books include two studies of Samuel Taylor Coleridge, an account of the American theorist Kenneth Burke, a textbook on Romantic writing, and Uses of Education: Readings in Enlightenment in England. With Stephen Bending, he is series editor of the Chawton House Library Series and the two have co-edited novels by Henry Mackenzie and Thomas Day. Stephen has also edited (with Stephen Morton) the collection Foucault in an Age of Terror: Essays on Biopolitics and the Defence of Society and published essays on Pope, Thomas Gray, Anna Barbauld, Joseph Priestley and others: a new book on Priestley and the rhetoric of dissent should be out next year.

Robert Webster Building is located mid-way off the UNSW main walkway. Map Reference G14. G17 is located on the ground floor. Please note the main entrance off the central walkway is on Level 1.