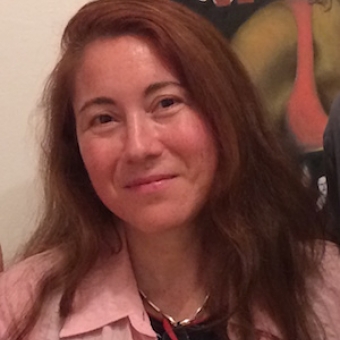 In 2014 Miriam Cabello returned to Sydney from the USA with an international award, Keys to the City of Daphne, Alabama and her artwork as part of the permanent collection of the United States Sports Academy Museum.

Miriam Cabello’s art and artistic practice are emblematic of cross-cultural understanding and respect for human rights. Cabello’s oil paintings emerge from these themes and are exquisitely realised in her iconic bodies of work: The first September 11-The Chilean Military Coup, The Pugilist Passion and White Rope.

Cabello felt that the themes in her artwork needed a new approach to transparent oil painting, after 20 years development she created ©Spectral Kinetic Realism where the luminous emotional colour temperature of individuals is revealed over multiple layers while appearing realistic. In the Passion series Cabello honours the oral histories of Aboriginal boxing legends. She employs religious allegory to interpret their evocative stories on a grand scale.

The White Rope series depicts luminous torsos woven into a grid of gestural drips. Each emotive piece explores the range of emotions she experienced when confronted by her first live boxing match – the cascading drips of blood and sweat that stained the boxer’s body, the solace and tenacity in the individual’s gaze. Series II & I has sold out to collectors and major works are held in permanent collections.

Cabello has been acknowledged nationally and internationally with multiple awards for her contribution to art, education and cross-cultural engagement. Some of her career highlights include being the first Australian awarded at the international Annual Religious Art and Architecture Design Awards for The Pugilist Passion, selected by the Vatican to exhibit during the 2008 World Youth Day festival and consecutive National Art Museum of Sport annual, international competitions finalist. The inaugural painting White Rope I was awarded at the Florence Biennial of Contemporary Art, Italy.

She runs reconciliatory themed workshops collaborating with councils and University of Sydney & NSW. Recently Cabello was named 2014 Sport Artist of the Year by the United States Sports Academy for her career contribution to fostering cultural understanding utilising sport allegory in visual art.