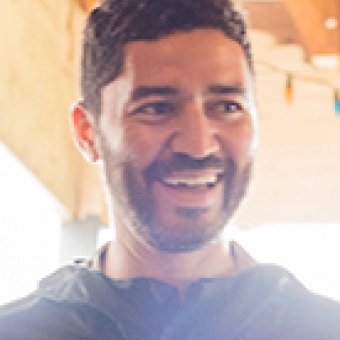 Tell me about your current role...

I am a Production Coordinator in a department called Red Engine Creative. We operate as an internal advertising agency for Channel 7, so we create branded content for Channel 7. I coordinate productions which means I set up shoots, predominately, and I also coordinate post-production as well.

What does your typical day look like? And what do you love about your job?

One of the reasons that I like this job is that there is not really a typical day. In peak periods we could have six shoots in five days. In the lead up to that I am either consolidating things from the previous shoot or prepping for the next one Sometimes I’m on set assisting the Producer and Director or helping the art department. When I am in the office, my work could include editing, converting video footage into different formats, dealing with budgets and administration. Every day is different. I really like supporting creative people and helping their vision come to life. On one day I’m working on a shoot where I’m working with cars, the next day on another shoot I could be working with food and that brings a whole different set of challenges. I also get to see how each department of a film set works without being tied to one department.

Did you imagine this would be your career? What would a 17-year-old Con think of what you are doing now?

17-year-old Con would be super happy with what I’m doing right now. I actually went to UNSW after working as a paver and various other jobs, and entered uni as a mature age student. I grew up loving film and TV and that’s why I tried to pursue a career in that direction, it just took me a little longer to get here, but in a lot of ways, that has been to my benefit.

Why did you decide to do a Bachelor of Media (Sound & Screen Production) at UNSW? And what was it like?

I moved from Adelaide to Sydney to study at UNSW specifically. I was looking at all the unis in Sydney, but I really liked that I could study some theatre units in my UNSW degree. A few people had recommended UNSW to me, so it was an easy choice. And the right choice! I thought it was a really good balance with theory and the practical study of film and television. I think I was the annoying mature aged student, doing all the readings and asking loads of questions. But both the theory and practical study have really helped me in the work I’m doing now.

What is your best memory of your Bachelor of Media (Sound & Screen Production) degree?

There are lots so it is hard to choose one! We did a video project where we made a documentary and a film, and at the end of the semester we had a film festival. It was such a great opportunity for us as students, and we were also given enough freedom to make it our own night. One of my mates and I hosted the night and that was awesome! Making the films was an amazing experience, and that subject was what cemented the trajectory for me wanting to be a production manager or producer.

Were there any a-ha moments during your degree that changed how you viewed the world or your career?

That video project was the lightening spark moment for me. We started with a documentary, and then made a feature film. I pushed to be a producer because I knew that was the trajectory I wanted to go in.

How do you feel that your Bachelor of Media (Sound & Screen Production) shaped your career?

I got two internships through UNSW and I think that they are the best things to get you a job in this industry. You get real life experience and if you’re willing to learn and work hard, people will see that and write a reference for you. When I got my job at Channel 7, I had two referees from within the industry that could actually say I’d worked with them.

What is the most valuable thing you took away from your time at UNSW?

Learning how to communicate within the industry. At UNSW we learnt a lot of film and TV terminology. My role really is about communicating with different people and knowing that terminology means that I can understand people in many different roles, and can translate that TV-speak for people we work with such as venues and caterers, who are outside the industry.

Where else have you worked since graduating?

Channel 7. I have been working here in the same department for the last three years. But last year I took a month off to shoot a film with an old tutor from UNSW. He wrote and directed it, and asked me to help produce it. We made a low budget film through crowdfunding and we are currently in post-production. It was strange to be in a role where the buck stopped with me. It was a massive learning experience. I jumped back to Channel 7 after that and I could see the improvement in my work straight away. It taught me how to deal with pressure within the industry more than anything else.

What is your greatest achievement to date? (Professional or otherwise)

A group of friends from UNSW and I started our own production company called One Three Six Productions. We decided to make a film for Tropfest. It ended up being a musical! I was a producer, even though I am not musically inclined. We made the film under $500 and it got through to the top twenty finalists of Tropfest!

What advice would you give to someone trying to decide if they should sign up for a Bachelor of Media (Sound & Screen Production) degree?

I’d definitely say do it. It is such an interesting degree. Even if you decide to work in a different field, you will have learnt a lot about the way the world works, particularly though the media subjects.