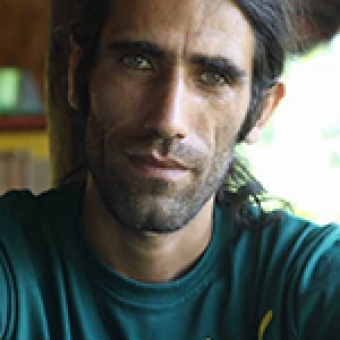 Behrouz Boochani graduated from Tarbiat Moallem (Kharazmi) University and Tarbiat Modares University, both in Tehran; he holds a Masters degree in political science, political geography and geopolitics. He is a Kurdish-Iranian writer, journalist, scholar, cultural advocate and filmmaker. Boochani was writer for the Kurdish language magazine Werya; is Honorary Member of PEN International; winner of Amnesty International Australia 2017 Media Award, the Diaspora Symposium Social Justice Award 2016, the Liberty Victoria 2018 Empty Chair Award, and the Anna Politkovskaya Award 2019 Italy for journalism; his book No Friend but the Mountains, Writing from Manus Prison (Picador 2018), is shortlisted for the Victorian Premiers Award for Non-Fiction, 2019; and he is non-resident Visiting Scholar at the Sydney Asia Pacific Migration Centre (SAPMiC), University of Sydney.

Within months of finding himself in Australia’s Manus Island Detention Centre (Manus Prison), Boochani began to make contact with journalists and human rights defenders outside the camp. He gathered information about human rights abuses within the camp and sent them via a secreted mobile phone to news organisations and human rights advocacy groups such as The Guardian, Sydney Morning Herald, BBC Persian, Humanitarian Research Partners, Refugee Action Collective, and the United Nations. Almost 6 years later Boochani remains in exile and continues to work as a human rights defender, a journalist, writer, and artist from within the prison. He believes that it is his ‘duty to record the practices that enable this system of indefinite detention and systematic torture’. His work can be understood as historical document and witness, as well as political, theoretical, practical and creative intervention. His work continues to expose human rights abuses within the Australian immigration detention system and to resist cultural genocide of Kurdish culture.

In 2015 Boochani was adopted as a Main Case by PEN International in recognition that he faced ongoing high levels of surveillance and harassment as a result of his work reporting for the Australian media and various human rights groups whilst detained.

Boochani has written hundreds of articles from within Manus Prison, publishing regularly with The Guardian, and with The Saturday Paper, Huffington Post, New Matilda, The Financial Times and Sydney Morning Herald. His substantial twitter (27.3K followers) and Facebook accounts document the effects of Australia’s policy of immigration dentition and are used internationally as primary sources for journalists and scholars reporting on situations on Manus Island.

Boochani is author of the acclaimed book No Friend but the Mountains: Writing from Manus Prison, trans. Dr Omid Tofighian, Picador, 2018. The book has been shortlisted for the Victorian Premiers Literary Award for Non-Fiction 2019.

Behrouz Boochani has produced a stunning work of art and critical theory which evades simple description. At its heart, though, it is a detailed critical study and description of what Boochani terms ‘Manus Prison Theory’. - Judges report, Victorian Premier’s Literary Award for Non-Fiction, 2019

Boochani’s other creative works include a feature-length film Chauka, Please Tell Us the Time which he clandestinely filmed on a mobile phone, and secreted the footage out of the island to codirector Iranian-Dutch film-maker Arash Kamali Sarvestani; collaboration with Nazanin Sahamizadeh on her play Manus; collaboration with photographer Hoda Afshar on the video installation Remain featured at the Australian Museum for Contemporary Art, 2018.

Boochani collaborates with lawyers and Human Rights organisations and grassroots advocacy groups to resist human rights abuses he and others detained in Australia’s off-shore prisons, are subject to. He is currently collaborating with the National Justice Project, documenting and collating evidence of health based negligence within the Manus Prison system.

Boochani has twice been arrested and jailed as a consequence of his work in Manus Prison. He remains a Main Case for PEN continuing to work under threat, harassment and surveillance.