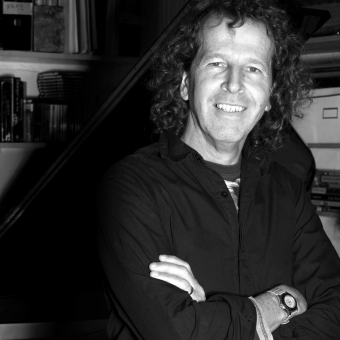 Alister Spence is an internationally-recognised pianist, composer, and performer of jazz and improvised music.
He holds a PhD in Creative Practice (Music Composition) from the University of New South Wales, and a Diploma in Teaching from the University of Technology Sydney. His original compositions and performances are documented on more than fifty albums. Alister Spence has played with and composed music for a number of important ensembles in Australian jazz and improvised music from the 1980s until the present, including: Clarion Fracture Zone, Wanderlust, the Bernie McGann Trio, the Australian Art Orchestra, and the Alister Spence Trio. He is currently leader of the Alister Spence Trio, and co-leader of Kira Kira (with Satoko Fujii and Natsuki Tamura, Japan), Sensaround (with Sia XRay, and Raymond MacDonald, from Australia and Scotland), and the Spence/MacDonald duo.

Awards for Alister Spence’s composition and performance work include the 2014 APRA/AMCOS Art Music Award for Everything Here is Possible, a duet with US pianist Myra Melford. He received an Australian Record Industry Award (ARIA) in 1990 for Blue Shift (Best Australian Jazz Album) as co-leader/composer/performer with Clarion Fracture Zone, and in 1993 for Wanderlust as composer/performer with the ensemble of the same name. In 2004 and 2007, the Alister Spence Trio was nominated for Best Australian Jazz Album (ARIA Awards) for the audio recordings Flux, and Mercury which feature original works by Spence and co-compositions with the two other trio members, Lloyd Swanton, and Toby Hall. In 2018 the Alister Spence Trio was nominated for an Art Music Award for their CD Not Everything But Enough.

Alister Spence’s compositions have been performed by the Australian Art Orchestra, Sruthi Laya Ensemble (Chennai, India), The Alister Spence Trio, Clarion Fracture Zone, Wanderlust, Bernie McGann, Sandy Evans, Julien Wilson, The Martenitsa Choir, Sensaround, Satoko Fujii Orchestras (Tokyo, Nagoya, and Kobe), and the Glasgow Improvisers Orchestra. These include several major compositional works. Soak, a suite in five movements was composed for the Australian Art Orchestra and premiered at the Melbourne International Arts Festival in 2009. In 2017 another extended original work, Imagine Meeting You Here, was premiered by Satoko Fujii Orchestra Tokyo at the Sengawa Jazz Art Festival in Japan, and by the Glasgow Improvisers Orchestra at GIOFestIX in Glasgow.

Alister Spence has also composed extensively for film. He was awarded ‘Best Score’ for Journey  at the Edge of the World Film Festival (Hobart) in 1998, and his score for the feature film Beneath Clouds was nominated for Best Score at the 2002 Australian Film Industry Awards, and the Film Critics Awards in the same year (co-composed with director, Ivan Sen). Additionally he has worked in mixed media performance with film and video artist Louise Curham. This collaboration has been documented on the CD and DVD fit (Rufus Records, 2009).

Alister Spence has been the recipient of numerous grants from the Australia Council for the Arts, Department of Foreign Affairs and Trade, and the Australia Japan Foundation, for the composition, recording, touring and performance of new work in Australia, Europe, Canada, US, Japan, Taiwan, China, and India. He maintains ongoing musical collaborative relationships with colleagues in Australia, Japan, Scotland, Sweden, Germany, and the US. These relationships have resulted in a number of highly regarded original music CDs.

At UNSW Alister Spence teaches in the areas of jazz composition and improvisation.