‘Apathy can be deadly’: how your action can change the world

UNSW students and staff burst the myth that protests about climate change are nothing but hot air as they prepare for the National Day of Action.
Rachel Gray | UNSW Newsroom 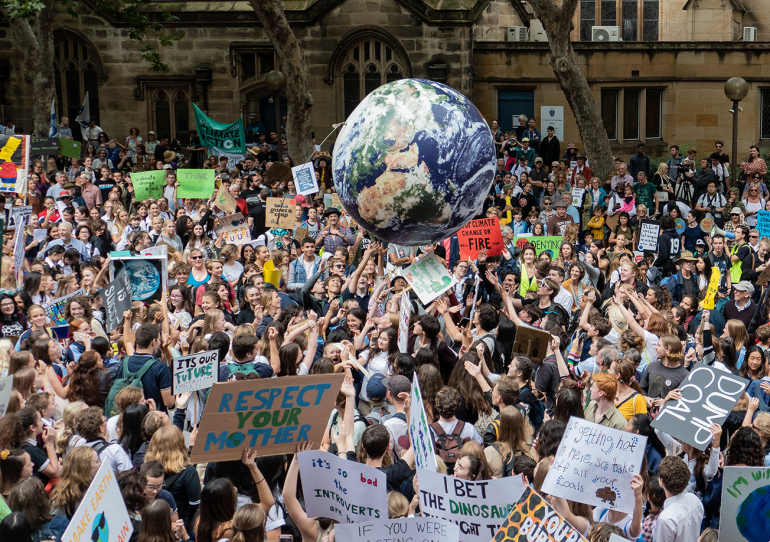 UNSW student Mirima Goldman says she goes to rallies because it gives her a chance to be around people who care just as much as she does about the environment.

It also puts pressure on governments to act, the 20-year-old says.

“I also love that you can chant as loud as you want and let out all the anger you have towards the injustices of climate change,” she says.

Ms Goldman is heading to the Climate Crisis National Day of Action in Sydney this weekend, which coincides with protests in Melbourne, Canberra, Newcastle, Fremantle, Brisbane, Adelaide and Darwin.

But even she sometimes wonders whether her actions make a difference.

And it is this question that UNSW Professor Jeremy Moss delved into as part of his ground-breaking research alongside philosophers at University of Adelaide and ANU.

“It turns out one of the strongest reasons to take action is so you can do your ‘fair share’,” Professor Moss says.

“Joining in with others is one of the most important things you can do.”

From avoiding single-use plastics, to driving less, conserving water, switching to sustainable energy, buying seasonal fruits and vegetables, there are many ways an individual can contribute.

Another one of those collective actions is by attending climate change protests.

Professor Moss says he will also be attending the Climate Crisis National Day of Action this Saturday (Feb 22) in the attempt to put pressure on Australian politicians to meet its emissions reduction goals.

The 26th Conference Of the Parties (COP) meeting in Glasgow in November will mark five years since member nations agreed to reduce global emissions to net zero per cent by 2050.

“So, Australia – along with Saudi Arabia, Russia and other fossil fuel exporting countries – is planning to use what are called ‘Kyoto Credits’, that is, emissions credits that were given to Australia a long time ago.”

He says that instead of reducing the nation’s emissions by 26 to 28 per cent by 2030, Australia will use those credits, which will mean a smaller reduction in emissions.

Australian companies need to join the collective action and drastically switch from fossil fuels to renewables across all sectors, including electricity, transport and agriculture, Prof. Moss says.

If we do not do that, he warns, bushfires, flash flooding and other catastrophic events will worsen as a result of excess greenhouse gases.

“So, people often ask: what is the most effective thing to do about climate change?” Prof. Moss says.

“Often the choices are reducing your personal carbon footprint, or taking political action.”

The politics of change

And taking political action is something UNSW political and international relations professor Dr Nicholas Apoifis is an expert at.

Dr Apoifis teaches the top performing ‘How to start a revolution’ subject to socially aware third-year students at the UNSW Kensington campus in Sydney.

And he agrees with Ms Mirima and Professor Moss, that protests do effect change by demanding climate action from our political leaders.

Dr Apoifis says that very rarely do politicians act on a “whim” of their own “want or will”.

Many politicians end up working in the private sector – such as the mining industry – and funds from those companies usually find their way back to the major political parties, he says.

It is known as “the revolving door” and Dr Apoifis says this raises serious questions about corporate interests influencing government decisions.

“So one is more inclined to, let’s say, ‘hit the streets’,” Dr Apoifis says of the frustration thousands of people are feeling about the lack of political action on climate change.

And they have ‘hit the streets’ – en masse.

Last November, about 6 million people across more than 200 nations united ahead of the COP25 meeting in Spain, in step with Swedish teenager Greta Thunberg, to protest climate change inaction by governments and corporations.

“Without pressure from the people, our leaders can get away with not doing anything,” the 16-year-old Thunberg told the world in December last year.

Dr Apoifis says that government inaction on climate change has forced the youth to join the global movement to save the planet.

“Hitting the streets is very reasonable to change the status quo because apathy, in this case, can be deadly.”