It took 22 years for Lily Khash-Erdene to make good on a pledge to her father to study overseas. 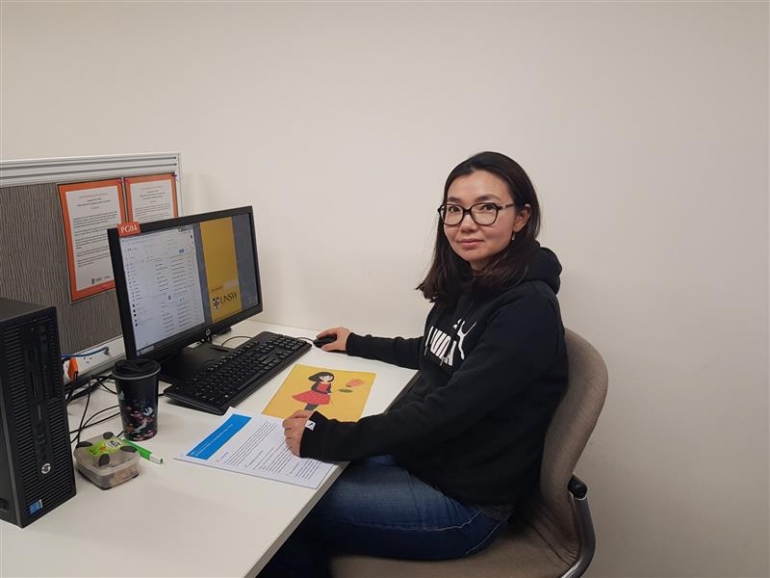 Lily (Badamlyankhua) Khash-Erdene never lost sight of a pledge she made as a 13-year-old to her late father to improve her English and study overseas, with the aim of helping her home country of Mongolia.

“I was in junior high school and my dad told me that learning a foreign language, especially English, is the key to studying abroad and gaining excellent knowledge,” the UNSW student says.

“I vividly remember that he emphasised the USA and UK as the most developed countries, and Mongolia as being many years behind them.” He told me, “If you learn English very well, you can study in those countries and understand how we can develop.”

Twenty-two years later, the high achiever is about to graduate with a Master of Environmental Management (MEM) from UNSW Faculty of Arts & Social Sciences. But the path to studying at UNSW has been full of hurdles and hard work. Soon after Mrs Khash-Erdene entered high school, Mongolia transitioned from a centrally planned economy to a free-market economy, and from a communist to democratic system.

Both her parents lost their jobs, she says. With the financial help of her widowed mother, she started a Bachelor of Economics and studied English and Korean, but realised the only way she could study overseas, as her father had wished, was to receive a full scholarship.

After “four hard working years”, Mrs Khash-Erdene graduated with a Bachelor degree with Honours and at the top of her class from the School of Economics and Business at Mongolian University of Life Sciences. She then received a Korean Government Scholarship to study a Master of Business Administration at Kookmin University in Seoul.

“Even though I learnt Korean better than English at that time, I never gave up studying English,” she says.

After completing the Master’s degree, Mrs Khash-Erdene went back to Mongolia and worked for the government as an officer, economist and researcher, but did not give up on the goal she set as a teenager to help her country develop.

“I became more determined to study a sustainable development-related degree. The economic growth of Mongolia soared in 2011 because of mining, however citizens were not well provided for and Mongolia was starting to experience environmental degradation. I wanted to do something to change the system.”

A look into several international scholarships eventually led her to the Endeavour Leadership Scholarship, the only one that allowed her to bring her husband and daughter with her while she studied. The high-achieving Mrs Khash-Erdene received offer letters from all the Australian universities she applied to, but she chose to study at UNSW.

“I wanted to study more in-depth about environmental management and only UNSW was offering a two-year Environmental Management program at the time of applying,” she says. “Sydney is also a multicultural city, and it’s easier for my husband to find a part-time job here than other cities as an international student.”

Mrs Khash-Erdene enrolled in the two-year MEM because she liked the program’s structure, which allowed her to take electives from UNSW’s Faculty of Science or School of Business.

“The compulsory subjects are well designed and made me understand environmental problems in relation to the economics and social sciences, including laws, human wellbeing and developmental issues,” she says. “I learnt about development-related issues around the world and I understood what my dad wanted me to study when I was a teenager.”

She enrolled in four mentorship programs at UNSW while she was studying full-time:Cultural Mentoring, Skill Development, the Career Ready Mentoring Program and Professional Development Program. Mrs Khash-Erdene also improved her swimming skills through the Learn to Swim program for international students hosted by UNSW Health at the University’s Fitness & Aquatic Centre.

Still on study leave from the Mongolian University of Life Sciences, she intends to return to her home country after she gets some experience in sustainable development-related work in Australia.

Her advice for students is to choose to study what you really want to know and try to be an expert in that in your degree.

“Read as much as you can. UNSW Library has millions of research papers and books to support your study. Studying at university is the biggest investment for the rest of your life. Read, read, read, then write.”