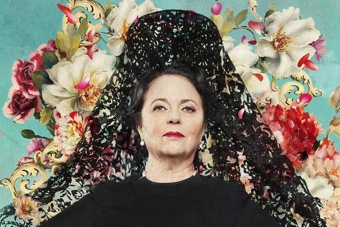 Presented by the UNSW School of Humanities & Languages in collaboration with the Consulate General of Spain, Instituto Cervantes and the Spanish Cultural Heritage Association of Australia (SCHAA).

In this clever debut, director Marta Díaz de Lope Díaz and her host of eccentric characters challenge traditional taboos with a fresh and funny perspective on female empowerment and patriarchy in the church. Carmen, a devout Catholic woman from Málaga is on the cusp of changing history to become the chosen leader of her local religious guild. However, her dream is all but crushed when her biggest rival is chosen: the ridiculous, arrogant Ignacio, who is also determined to prevent her from holding the post.

This is a refreshing representation of the devoted Catholic middle-aged Spanish woman, with wonderful performances, great humour, and a wicked edge that entertains to the very end.

Film screening will be followed by a Spanish Fiesta from 8:30pm at the White House.

Nadie Nos Mira is a film about the struggle of self-imposed exile; how the pleasures of anonymity and freedom contrast with the pain of loneliness and loss that shapes immigrant experience. NICO, mid 30's, is a young Argentine actor fighting to build a career in the US, lured into believing that his talent will help him find success "on his own". But that's not what he finds. Too blond to play Latino with an accent too strong to play anything else, Nico gets stuck between identities.

As the new millennium began, one news story captured the attention and hearts of nearly every American. On Thanksgiving 1999, a young Cuban boy named Elián González was found floating in the Florida Straits by himself after his mother drowned trying to seek refuge in the United States. Before long, the 5-year-old González became the centrepiece of an intense custody battle between his father back in Cuba and his relatives in Miami, which, in turn, brought attention to the long-brewing tensions between Fidel Castro’s Cuba and the U.S. Throughout the news coverage, though, one voice was too young to join the heated international conversation: that of Elián himself. Eighteen years later, in the wake of Fidel Castro’s monumental death, ELIÁN lets the now 23-year-old tell his story, along with the other key players, of one of the biggest news events in modern times.

Chico is a young piano player with big dreams. Rita is a beautiful singer with an extraordinary voice. Music and romantic desire unite them, but their journey - in the tradition of the Latin ballad, the bolero - brings heartache and torment.

Marina (Daniela Vega), a transgender nightclub singer, comes under suspicion when her much older lover Orlando (Francisco Reyes) dies suddenly. After being harassed and threatened by her late boyfriend's vengeful relatives and the police, she must defend her rights as both Orlando's partner and as a human being.

Chinese Takeaway is a multi-award-winning comedy from writer/director Sebastian Borensztein, focused on the chance meeting between introverted hardware store owner Roberto (Ricardo Darín, The Secret in Their Eyes) and Jun (Ignacio Huang), a Chinese orphan who does not speak a word of Spanish and is in Buenos Aires to find his uncle, who also happens to be his last living relative. The film chronicles Roberto and Jun's misadventures as they search for Jun's uncle, all while attempting to understand each other despite the language barrier.

The film screening will be followed by an Argentinian themed after-party from 8:30pm at the White House with Ola Lola's famous empanadas and music. Proudly supported by Ola Lola. Film ticket required for entry.